This one’s for the dreamers.

Today we have Steven Hinkeldey, co-leader of the sponsorship site in Guatemala, sharing a story about one of the students in the program.

Saidy has been in our program since she was in the fourth grade. She is now sixteen years old and is going into her first year of high school. In Guatemala, High School is run on a vocational system. Students choose the career that they want to have as a future career and then they study it for either two or three years, depending on the school. Once they graduate the doors are open for them to find a much more stable job with consistent pay along with being able to go to a university.

Saidy has approached her upcoming high school career unlike any student we have known. Coming from one of the poorer homes in El Gorrión, Saidy does not have a lot of privileges or opportunities to help her along the way but she has not let this lack stop her. Last year we started talking to her about what she wanted to study and at first, she was reluctant to say… Finally, she told us she wants to be a doctor but knows that this would be difficult to do because of how expensive it would be to study medicine. However, she could never think of another alternative career. Her heart was set on becoming a doctor.

Saidy has shown something different than other students. She walks with a maturity unlike many others and is focused on what she wants. After consideration, the Sponsorship Committee has decided to go above and beyond to help her achieve her dreams. What does this mean? It means that she has enrolled in the school Liceo Antigueño where she will be studying basically a high school version of pre-med! 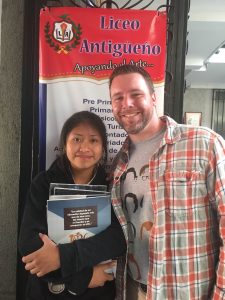 We took her earlier this month to get her uniforms and books. The gratitude that she showed, the smile growing on her mouth as we finalized her inscription into the school are all we need to know that this girl is going to go on and do amazing things. Look out world! The first-ever doctor from El Gorrión is on her way!